What's the Deal with Sexual Orientation? Is Society's Prejudice Justified? 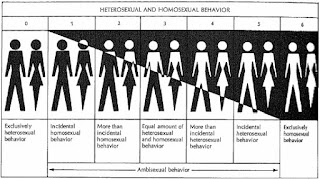 Sexual orientation, or which sex we're attracted to, has always been a fascinating topic. Specifically, I've been fascinated with the emotion behind the prejudice against gay, lesbian, and bisexual individuals. Why do people care which gender another person loves?

I grew up in a small rural town. It wasn't as conservative as some other areas Shelly and I have visited in our travels, but it was rather typical. As kids and teens, we would routinely use "gay" to describe something we didn't like and "fag" as a derogatory term. I never actually gave much thought to the idea that people could be attracted to the same sex; it just wasn't in my sphere of experience. I didn't understand why someone would like a member of their own sex, but I had far more important things to think about.

When I went to college, my intro to psych professor discussed sexual orientation. He talked about the present research (mid-nineties at the time) and the possibility that sexual orientation could be determined by genetics or biology as opposed to a conscious choice.

It was one of the first times I realized my view of the world was incredibly limited.

It forced some fascinating cognitive dissonance, namely the fact that sexual orientation could be outside the realm of free choice and my prior behavior toward homosexuality was nothing but ignorant prejudice.

When I became a teacher, I was thrust into an overtly hostile antihomosexual environment. Our principal at the time did nothing to stop bullying, including that coming from teachers. Over the course of a few years, a few other teachers and I managed to build a small community where we attempted to create a safe place for students.

The stories they told were absolutely heart-breaking. They had been tormented with their feelings for years. Many clearly understood they were attracted to the same sex, but were immersed in a world that would severely punish them should they speak out. Most that did come out to their families were essentially abandoned. The few kids that were open about their sexual orientation experienced severe harassment. Many had contemplated suicide; a few actually tried.

Since those early experiences, I've been a fairly vocal advocate of equal rights based on sexual orientation. It's one of the few opinions I express that I genuinely support (as opposed to many others which are just done for the sake of spirited debate.) Most of it is based on a combination of realizing my gay, lesbian, and bisexual friends are no different than my heterosexual friends. It's also based on science. Finally it's based on a sense of moral justice... I cannot justify treating a group differently based on my own personal sense of right and wrong.

I honestly cannot understand the opposition to homosexuality. Science is fairly clear and supports what pretty much any gay, lesbian, or bisexual person will say- they didn't make a choice about who they are attracted to. Based on that, prejudice against sexual orientation is no different than racism, sexism, ageism, or handedness.

Some people like to use religion as a rationale for their prejudice, but is that really warranted? Let's use Christianity as an example. Some sects and denominations are overtly anti-homosexual. Why? Because of a few passages that hint at it? What about the overarching theme of the Bible- treat others as you wish to be treated? And didn't Jesus preach love and acceptance? Could you imagine Jesus beating up a dude because he was gay? Why do we use the Bible to justify antihomosexual prejudice but yet stopped stoning women? What about other parts of the Bible that direct followers to stick up for those that have no powers? For example:

Proverbs 31:8- "Speak up for those who cannot speak for themselves; ensure justice for those being crushed."

Is there an asterisk after that passage that omits sexual orientation?

Marriage is a popular, more acceptable means of expressing our homosexual prejudices. Some will use a rationale that allowing gay and lesbian couples to marry will somehow ruin the institution of marriage. What the fuck is that about? As a married dude, I'm positive denying others the same right I have in no way devalues the relationship I have with my wife.

Some argue that allowing homosexual couples to marry will open up a floodgate of people wanting to marry inanimate objects, animals, or something similarly stupid. Marriage is a consensual activity. If one cannot give consent, one cannot get married. Simple but powerful idea.

Others like to argue the economics by claiming allowing homosexual couples to marry will somehow hurts us on a micro or macroeconomic level. Regardless of the legitimacy of their argument, it ignores the fact that heterosexual marriage would cause the same potential problems. If you're anti-marriage based on economics, that's cool... but be anti-marriage, not anti-gay marriage.

Sometimes people drag children into the equation by justifying homoprejudice on the grounds that homosexual cannot have kids. Of course, this ignores the fact that a significant number of gay, lesbian, and bisexual individuals have kids. Sexual orientation doesn't eliminate the mechanics that allow procreation. That aside, if having children is so important, shouldn't we also have the same prejudice against heterosexual individuals that choose not to have kids?

Finally, many will justify their prejudice under the belief that eliminating prejudice will allow homosexuality to "spread." It's the "I don't want my kids to be turned gay" argument. Simple logic should dispel this idea by paraphrasing a gay friend "Why on earth would anybody voluntarily choose to ignore their biological attraction to the opposite sex to live a life of persecution and social rejection?!?"

A few years ago, a line of research emerged that attempted to answer a question- is prejudice towards homosexuals a defense mechanism against an individual's latent attraction to the same sex? In other words, are gay-bashers so emotional in their prejudice because they're hiding their own desires toward the same sex?

The research, which used some pretty nifty experimental methods, seemed to indicate this is true. There's not enough data to reach a consensus, but there is enough to consider this a possibility.

Westboro Church? I bet all of the members are pretty far to the right of the Kinsey scale. :-)

I also think the prejudice we see toward homosexuality is based on the same principles that affect all our prejudices... we fear what we don't understand. It's no surprise people's perceptions of homosexuality change dramatically once they get to know a few people that are not heterosexual. We break down stereotypes we have toward groups once we stop seeing them as a "group" and begin seeing each other as individuals.


At the very minimum, prejudice against any group should elicit at least some feelings of injustice. Can we really rationalize poor treatment of any group of people? Do we have the right to infringe on the rights of others, especially if their rights don't infringe on ours? Are we really doing to use someone else's moral code to rationalize our own prejudice?

What do you think? Leave a comment, but be respectful. Intelligent discourse is welcome, but overt hatred will not be tolerated. ;-)

Posted by Alex Hamilton at 9:56 AM