Are We Paleo Sluts or Paleo Cheaters? 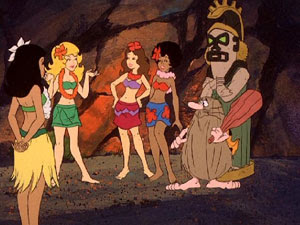 I recently finished the book Sex at Dawn: How we mate, why we stray, and what it means for modern relationships by Chris Ryan and Cacilda Jetha. The book offers an alternative view to the common evolutionary psychology explanation of the development of human sexuality. This topic fascinates me because understanding our past helps explain our present, and human sexuality was to be my area of study had I continued down the path of post-graduate research psychologist training. Also, any topic dealing with sex is, by default, automatically intriguing.

The common explanation works something like this: Our relationship and sex behaviors have developed for the expressed purpose of passing our genes on to the next generation. This includes how we're attracted to each other, how we become couples (pair-bonding), the development of our relationships, and the rationale that explains why it's so hard to maintain those pair-bonds over time (why we're so apt to get divorced or cheat on our significant other.) This entire theory more or less explains the phenomenon of serial monogamy (where we go from one exclusive relationship to another to another.)

I was first introduced to the various elements of this theory via the study of sociobiology back in my undergrad days. So many elements of the theory make sense. We're chemically attracted (via pheromones) to people that genetically would produce healthy kids. The "honeymoon" phase of relationships serves to drive us to have a lot of sex by giving us boundless energy, obsessive thoughts about our partner, and the ability o ignore the outside world (including other people.) The "post-honeymoon" phase serves to bond us together so well care for the kid we conceived in the previous phase, which is driven by the neurotransmitter oxytocin. Eventually we start looking for other partners, which varies by sex. Men look for fertile women to spread their DNA far and wide; women look for either better resources (rich and powerful) or better genes (studs.) In this model, paternal certainty, or the dad knowing he's actually the dad, is important.


That's a dramatic oversimplification, but touches on a few of the main points.

Sex at Dawn fundamentally departs from this idea by rejecting pair-bonding as a means of passing on our DNA. The authors hypothesize our pre-agriculture hunter-gatherer ancestors didn't enter into monogamous relationships. Instead, both sexes were decidedly promiscuous with members of their own "tribe", and occasionally outside the group. The idea is any given woman would have lots o' sex with different males and sperm competition (the internal battle to get to her eggs) ultimately determined paternity. Since none of the dudes really knew if they were the father, the "father role" was diffused among the entire tribe.

Again, its a dramatic oversimplification, but it's a quick and dirty summary.

Most members of our species really like to have sex. It's an incredibly powerful drive. In our particular American culture, most of us champion the idea of monogamy. As I discussed in this post, we're pretty bad at monogamy. We tend to have multiple partners before settling down with that special someone, we have a ridiculously high divorce rate, both men and women have extra-marital affairs with frightening regularity, and we'd be much more likely to cheat if we could be assured we'd get away with it. Again, we suck at monogamy. Hell, one in four couples don't even put up a pretense of monogamy and actively engage in consensual, ethical nonmonogamy.

The Sex at Dawn theory postulates our sluttiness is a function of our pre-agriculture behaviors. Women want a lot of cock to encourage sperm competition, which serves as the "selecting the best genes" purpose. Men... well, their sluttiness is simply obliging the women. This model assumes we... well, just really love sex. Paleo sluts.

Both theories are interesting because they have supporting evidence and can at least partially explain most of our present-day behaviors. Both theories also have significant holes best exemplified by the differences between them.

I know quite a few of my regular readers are familiar with one or both theories. What do you think? Which one seems to more accurately capture our present-day behaviors? Leave a comment!