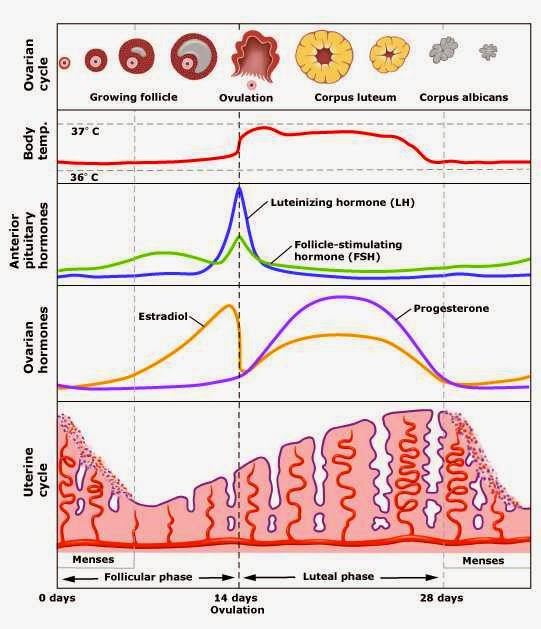 Pretty much every dude is familiar with the female menstural cycle. Most men know women have periods about once every month or so. That's about as far as most of us get in understanding female fertility. That's too bad, because learning to hack your wife or girlfriend's (or random women you're trying to pick up) menstrual cycle can dramatically improve your relationship. Before we get to that...

For our purposes, all you really need to know about ovulation is the timing. Women ovulate (when an unfertilized egg is released from one of her ovaries) about fourteen days before they begin their period. If a woman has sex a few days before to a few days after ovulation, she can get pregnant. The actual window when the egg is viable is actually less than a day, but sperm can be viable inside a woman for days. If you want a much more detailed explanation, check this out.


So how do you know when a woman is ovulating? I recommend doing this in secret, though open-minded women would probably be on board with this project. Anyway, here are a few methods:

If you read through my entire "Women, Explained" series, you're familiar with the role of sociobiology in dictating our mating behaviors. If not, here's a brief primer. Women have a dual sexual strategy I describe in the hypergamy post. They want an attractive, dominant alpha male for his sperm contribution (produces healthy kids) and they want a committed, supportive beta male for security and provisioning. Ideally, they find this combo in one guy. That doesn't happen often, though.


Because of that, nature has a funny way of making sure our species survives. When she's fertile, women crave masculine "manly" men (alphas) for their sperm. When she's not, she prefers the company of a beta male to help her and her children survive. Based on the nature of female desire, this sets up a situation where women's sex drive fluctuates with her menstrural cycle. She gets horny (usually on par with what us dudes experience 24/7) around ovulation, especially in the presence of alphas. This is when she's most likely to have advertising sex. The rest of the month she's significantly less aroused and far more likely to have maintenance sex.


In our not so distant past (or sometimes even today), this meant women were committing to the best provider they could attract based on their sexual market value, but also having sex with the most attractive male they could attract based on their SMV. If these were different men, she'd likely give birth to the alpha's kid and the beta male would raise it (believing it's his own.)

How to Hack Ovulation to Improve Your Relationship


Okay, so how can this weird feature of ovulation be used to improve your relationship? It's pretty easy - just display strong alpha traits in the days leading up to ovulation, then kick back and beta it up the rest of the time.


The more convincing you can play the alpha role, the more pronounced her arousal should be. I would recommend starting four or five days before ovulation, be an alpha whenever you're in her presence, and keep it up for about four or five days afterward.


A lot of guys have asked me "how do I know if I'm an alpha or a beta?" There's a fun little test that can tell you exactly where you stand, at least in the eyes of your significant other. If she initiates sex enthusiastically around the time of ovulation, odds are good she sees you as her alpha. If you initiate and she responds enthusiastically, you're still in pretty good standing. However, if she avoids you when she's ovulating, you're in trouble. It means a) she does not see you as her alpha and is not sexually aroused by you (meaning you probably need to change), and b) odds are good she'll be prone to being seduced (or seducing herself) other alpha males. If she's dressing in that slinky dress with matching bra and panties for the "girls' night out dancing", that's a really, really bad sign.


Birth control pills deserve special mention here. If your woman is on the pill, this entire post is probably invalid. We don't fully understand this effect yet, but women on the pill do not always follow this same set of rules because women typically do not ovulate. The pill, regardless of the brand and composition, more or less mimics pregnancy. In the absence of hormones that cause her to crave alphas when ovulating, women probably prefer betas all the time.


This could explain the rise of the beta male since the development of oral contraceptives. Us men are nothing if not efficient. The sexual marketplace, post-oral contraceptives, demands more betas. We adjust our behaviors to make up for this demand by becoming more beta.


Of course, the problem with this is women are not really aroused by betas and that tends to deep-six relationships after a few years. I like flirting with this hypothesis because we typically blame the explosion of betas on our society on all kinds of social factors from feminism to capitalism. The fact that a tiny pill could throw our entire mating strategy off kilter amuses me.

Understanding and hacking female ovulation is a very simple method to ramp up the passion in your relationship. In fact, mastering this technique is probably the easiest way to alternate between passion and intimacy. Ovulation can also be used to assess your own "alphaness." Finally, the development of oral contraceptives may have been at least partly responsible for our current "excess beta male" problem.