Why Feminists Want to Kill Masculinity

Fun title, huh? My recent foray into exploring gender roles has led to some interesting places. None has been more interesting that attempting to answer the question of "why do feminists hate masculinity?" along with the logical follow-up of "Why are feminists trying to kill masculinity?"

For a long time, I've held the belief that our modern world driven by feminism isn't so much a linear progression from oppressive misogyny to gender-equal androgyny, but rather part of a natural cycle of peaceful civilization and chaotic anarchy that has ebbed and flowed throughout our history. The more "civilized" we become, the less need there is for masculinity to protect the tribe. In times of war, famine, drought, disease, natural disasters, or any other condition that threatens the tribe's safety or access to required resources, men were expected to sacrifice their lives for the tribe. When men talk about “manning up” or “taking responsibility”, they're really saying “be willing to die to protect the tribe.” 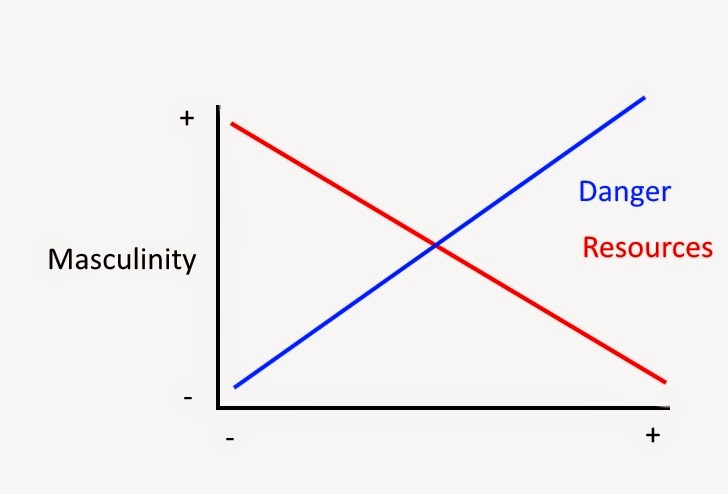 Since masculinity, at it's heart (and contrary to what modern society says), is about violence and aggression, it's dangerous to civilization in times of peace and prosperity. When masculinity is no longer needed, it fades as the dominant gender role and is replaced by a blurring of gender roles into a feminine-directed androgyny. Given we live in the most resource-rich era in the history of humanity, this is precisely what is happening today. With women passing men in education and the professional world, women don't even need men to provide today.

It's important to accept that this “destruction” of masculinity isn't done for nefarious reasons. It's not a secretive conspiracy orchestrated by a committee of man-hating women in a deep underground bunker under the Macy's headquarters. The move to extinguish masculinity is the exact same mechanism women will use when they attempt to “tame” a bad boy. The goal is to eliminate the bad characteristics that cause the bad boy to be a shitty partner and co-parent and reinforce that behaviors that lead to successful relationships (and family units.) Our species requires this process to happen to survive from generation to generation.

It's futile to try to exert that masculinity in the absence of a real threat, which presents a problem for the modern male. We probably don't have to force the issue, though. If we accept the Strauss-Howe generational theory, we've recently passed the peak in feminine-directed androgyny and and slowly advancing to males and females embracing gender roles to a greater degree than we have since the 1950's. The last few generations of women (and many men) placed the blame for female oppression squarely on masculinity.

That attribution has resulted in an aggressive vilification of all things “manly”, including drugging boys with ADHD stimulants, imprisoning a ridiculously high ratio of males, eliminating male-only spaces, presenting males as bumbling, incompetent idiots in popular media, and so on. The last few generations haven't been too good at understanding social dynamics or the fundamentals of human behavior. The millenials could be our level-headed saviors. They've fully embraced the concept of gender equality and also realized they can explore masculine and feminine gender roles without endangering that equality.

It's probably a moot point, though. I would contend masculinity also doesn't need “rescuing” because it's hard-wired in almost every male in the world. When the shit hits the fan, most males have little or no problem protecting their loved ones or doing what is necessary to secure necessary resources. If we were to experience a natural disaster, financial meltdown, or other such threat to our peace and security, masculinity will be there. It might be a little rusty, but we adapt quickly.

Because of these two dynamics, I resoundingly reject a few of the more common “solutions” people propose. Some want to keep doing what we're doing by forcing androgyny and eliminating masculinity as if it were an infectious disease. This is what the majority of us do today, which has resulted in my previous posts about the plight of the modern beta male. This will never work for one simple reason – women are really aroused by masculine behaviors. No matter how much we try to “metrosexual-up” men, the manly men will continue to attract the most (and best) women.

Others want to return to the “good 'ole days”, most commonly the 1950's. First, that's not possible because we have a radically-different society today, and rolling back the clock would mean we give up many of the social freedoms we've achieved. For men in particular, this means abandoning a lot of the freedom of self-determination we've earned. I'm pretty much a stay-at-home dad. I love that I have that option and it's more or less accepted by society. While I don't necessarily need society's approval, there are plenty of men out there that thoroughly enjoy the freedom from masculinity but would not be able to do so if they were socially rejected.

So what do men do in the meantime while we wait for the ebb and flow to return masculinity to equal status with femininity?

Men still have the drive to seek out risk and adventure. At some point, for some of us, TV, video games, and cheering for our favorite hockey team just doesn't provide enough stimulation. Ultrarunning gave me a taste of that and mma fighting clinched it. We have a deep, instinctual need to express our masculinity. I've learned very few if any women really understand (or even try to understand) this deep, primal drive. The more we express it in authentic experiences, the more alive we feel. Stepping into that cage was an experience like no other. If you've ever experienced a flow state while doing something you love, imagine that paired with having kinky monkey sex with an enthusiastic Kate Upton after doing a few lines of coke while listening to Rage Against the Machine live. It was that amazing. It was the actualization of that masculinity that had been locked away for my entire life.

The problem - society really does not want us to express or indulge in those pursuits. However, that's kind of the great thing about masculinity... we don't need permission. We don't need to appease gatekeepers by watering down our experiences. We DO, however, have to understand that masculinity is repressed in times of peace and prosperity because it's inherently dangerous. Masculinity, in it's raw form, is all about creating groups of “us” (the tribe) and “them” (everyone that's not part of the tribe.) Before a man can protect, he has to define the enemy.

This in-group/ out-group bias is a fundamental element of the “ism” concepts (like racism.) This tends to destabilize “civilized” society because anyone unknown becomes an enemy (think conservative Christians hatin' on gays) to be protected against. In our modern world, this is even more problematic because we have so many multinational corporations with a global capitalist agenda. In-fighting between groups means people are not buying consumer goods, which means less profits. In other words, corporations like GM, Monsanto, Microsoft, Walmart, BP, Samsung, and Apple have a vested interest in peace, and masculinity can be a threat to that peace.

So how do we overcome these issues?

The secret that I figured out, which is confirmed by observing adoring ladies fawning over alpha males, is that as much as society puts up a facade of hating masculinity, society secretly *loves* masculinity. No matter how civilized we become, there's always that scary unknown lurking at the periphery of our cushy lives. Society NEEDS men more than men need society, and the power in every relationship resides in the person that needs the other the least. Once we really internalize that belief, we break free of society's attempts to shackle our masculinity. Society can tell us masculinity is bad, outdated, or a tool of female oppression, but society's actions speak louder than society's words.

We may not need society's permission to indulge our masculine side, but we do have to either follow society's rules or fly under society's radar. With that in mind, we have to figure out exactly what behaviors we're missing and would like to reintroduce into our lives. We also have to figure out what masculine values or beliefs (like a code of honor, rites of passage from boyhood to manhood, the development of male-only places, etc.) we'll adopt. For example, being driven to be the best version of yourself you can possibly be is an excellent masculine trait that's entirely applicable to our modern society. Getting pissed and killing a random dude because he didn't use his turn signal... not so adaptive today.

Once we figure out what we want to believe and do, we need to make an actionable plan. This is what I've been working on doing for the last few weeks. Part of this involves getting an accurate "lay of the land" by understanding what really motivates women. As of right now, I'm still researching and holding discussions in the San Diego Man Camp Facebook group (join if interested.) I have a great deal of hope for this group, mostly because I've managed to identify many of the variables that our society loves and hates about masculinity, tagged the major gatekeepers that will ruthlessly attack any expression of masculine traits, and found enough like-minded men that are sick and tired of feeling completely lost. As it turns out, most men do not like their role in life and desperately want to find a way to free that buried masculinity. On a primal, instinctual level, we know this is what we're missing in our lives. We just need a road map. I'm making that road map.

It seems appropriate to end with another Jack Donovan quote:

“Men cannot be men—much less good or heroic men—unless their actions have meaningful consequences to people they truly care about. Strength requires an opposing force, courage requires risk, mastery requires hard work, honor requires accountability to other men. Without these things, we are little more than boys playing at being men, and there is no weekend retreat or mantra or half-assed rite of passage that can change that. A rite of passage must reflect a real change in status and responsibility for it to be anything more than theater. No reimagined manhood of convenience can hold its head high so long as the earth remains the tomb of our ancestors”
- Jack Donovan, The Way of Men