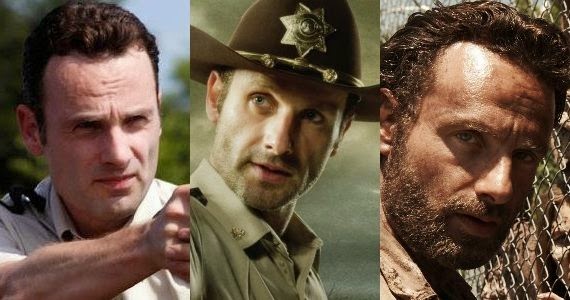 I was sitting in Starbucks yesterday engrossed in writing an earlier post for this series. Two relatively attractive women were sitting behind me. They were close enough for me to overhear most of their conversation. They were discussing The Walking Dead. Specifically, they were talking about Rick Grimes. They were lamenting how Rick today is much more attractive than Rick from season one (though they readily agreed he was still smokin' back then.) There was something else... some change that was setting their vaginas a-twitter, and they couldn't put their fingers on it.

If you're a fan of the show AND have two eyes that have ever watched female behavior, the answer should be immediately obvious. Rick today has a cruel, psychopathic streak he did not have in earlier seasons.

Rick is a jerk. And it makes women wet. And that infuriates A LOT of men.

Because it flies in the face of everything we've been told since we were old enough to listen to advice about women.

I can guarantee (almost, there are always a few weird outliers) MEN will respond with something along the lines of anger, frustration, or dismiss the women that fall for jerks as being "stupid." WOMEN won't respond. If they do, they'll give a vague answer that will be anything but denial.

When it comes to explaining this peculiar behavior, we tend to struggle. It's counter-intuitive. Not only does it fly in the face of everything we've been taught, but it's also illogical. I suspect this love of jerks is one of the reasons men think women's behaviors are so... for lack of a better word - crazy. Indeed, it does seem a little insane to fall hard for someone that treats you like garbage.

Yet that's precisely what happens.

And it's dictated by biology. In the last post in this series, I discussed the nature of female desire, I talked about the antecedents to female desire and how it's essentially a form of advertising. From an evolutionary perspective, this strong sexual response allowed women to woo men. Why? Because we REALLY love hot, passionate sex when a woman completely gives herself to us. For many men, that initial few tastes of raw passion is enough to keep them coming back for the rest of their lives, even if they never see that same level of passion again. Once hooked, dudes will do anything to recapture that initial high.

As I explained in the second post on hypergamy, women are competing for the best possible male they can attract, and fucking a jerk alpha is their highest priority. Why? Alphas will give their children all the positive characteristics that will help their children survive, even if the alpha father leaves them. For a woman, it's less of a gamble to fuck an alpha and believe she can "tame" him than fucking a genetically-inferior beta that will be her loyal servant.

Finally, as I explained in the third post on the sexual marketplace ("The Field"), this strong, intoxicating sexual response increases a woman's value. To a male, a "7" that's really into sex is more valuable than an "8" that lies there like a fish. Guys place an extremely high value on sexual enthusiasm, especially alpha males.

Got all that? Because there's more. Guys, probably because we've fallen in love with the idea that women are delicate flowers that need to feel respect, warmth, and closeness, really have a hard time understanding WHY jerks are superior to the nice guy. For those that have read the whole series on women, the answer should be pretty obvious - being a jerk to a woman is an incredibly powerful signal that he doesn't need her vagina. Why? Dudes love vagina, right? What dude's going to turn down vagina?

A dude with better options, that's who.

Think back to hypergamy and the role of evolution. The woman is biologically driven to get her genes to the next generation with the goal of her children being able to pass their genes to the next generation. That means her priorities are 1) secure the best possible genes to combine with hers, then 2) secure the resources to help assure those kids survive. Those two priorities are never reversed.

This is where things get a little... weird. This drive that women have to fuck alphas? It never goes away. That's really, really bad news for betas out there that refuse to believe these concepts, because your wife or girlfriend, no matter how strong her morality may be, will always get ridiculously aroused by an alpha that can reject her. The silver lining: That's really good news for alphas and betas that are willing to make changes.

I remember having a conversation with Joe the pickup artist (from No Bone Zone.) I asked him what characteristics he looked for in his married "targets." He laughed and said "They have to be hot enough to fuck." As it turns out, Joe didn't prey on miserable women looking to end their relationship as I would have expected. Joe preyed on any woman that he found attractive. All that really mattered is that they responded to him as women typically respond to alpha males... and all of them did.

Well, almost all. Women that were married to alphas ignored or rejected his attempts because subconsciously they recognized Joe was an inferior alpha to the alpha they had at home. Remember, it's all about getting the best genes to the next station on the commuter train that is evolution.

Of all the concepts I've talked about, this one is usually one of the more difficult for guys to accept. We (mistakenly) believe women are drawn to jerks because they're ignorant, were abused as a kid, or just haven't met their knight in shining armor (and, of course, the guy thinking these thoughts assumes he IS that knight.) We cannot accept the fact that women are not sexually aroused by nice guys.

Sometimes it can be difficult to understand how this dynamic plays out until you start observing it "in the wild" so to speak. Here are a few types of men out there and how this concept affects them.

White knights: Ah, white knights... one of my favorite targets of social media ridicule. A "white knight" is a dude that comes to women's rescue in discussions, presumably to protect her honor. The white knight believes his behavior is virtuous; he's saving the damsel in distress! In reality, he's proving he's the most beta of beta males. His actions reek of desperation. Yet he continues. The white knight doesn't understand two very important ideas: First, what he interprets as an act of courage is viewed by the woman as an act of desperation by a low-value male. Per the rules of hypergamy, low value males dry vaginas faster than an industrial strength food dehydrator sitting on the back deck of a house in Phoenix in July. Second, he's basically telling the woman "I'll exchange my dignity and self-respect for your affection." Remember the lesson from the female desire post - you can't negotiate passion. The white knight is hoping for obligation sex. Women hate obligation sex as much as the rest of us. The lesson - don't be a white knight. 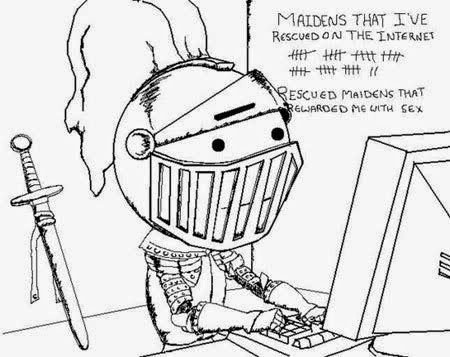 Spousal Abusers: Okay, this is entirely hypothetical, but may still be relevant. I've always wondered why women that are involved with spousal abusers don't leave when the controlling and mild abusing starts. For those that aren't familiar with the pattern, abusive guys always start off ridiculously charming, which draws women in. At some point, the charming behaviors change to mildly abusive behaviors, which I always thought should be a huge red flag. Those mild behaviors usually escalate to severe abuse and even death. By that end point, the woman always wants out, but usually does not have the actual physical means or support network to get away. Maybe, just maybe, those very early "abuses" trigger that alpha arousal. It's kinda like putting your cold hands near a hot stove. When we get close, we love the feel of the heat. If we get too close, we get burned.

I'm not suggesting abuse is a good thing; it never is. However, if this concept can be taught in the hopes that it allows even one woman to get away from an abusive situation, discussing this here now will have been worthwhile.


Second Generation Males: SGMs were explained in this post on the development of men over time. SGMs are modern males that have bought into the idea that not only do women want nice, passive, nonconfrontational, indecisive, respectful men, but those are the kind of men that drive women wild. Of course this is completely false, but the SGM really wants to believe it's true. In fact, the "better than average" sex SGMs have during the honeymoon period of their relationships, in their minds, confirms that women really are turned on by nice guys. And they are... until the honeymoon hormones wear off and they start eyeing the alphas.

Women are aroused by jerks because of their hypergamy drive because it identifies them as a high value male. It has nothing to do with a personality flaw of a specific woman or the entire sex in general. It's not due to social influence, a history of abuse, or any other such nonsense. It's evolution in action.

I'm currently working on the logistics of a workshop based on using the principles from these posts to help men in long-term relationships navigate these waters. One of the major goals will be teaching guys how exactly to embrace this "being a jerk" idea in a way that's not blatantly douchey. In other words, how can these ideas be utilized in a socially-acceptable way? Until the actual camp is developed, I set up a Facebook group to discuss these issues. Sorry ladies, it's a men's-only operation. We're already having some useful discussions; check it out:

"Unlock the Secrets of Women" SDMC