Why We Teach Boys Not To Cry 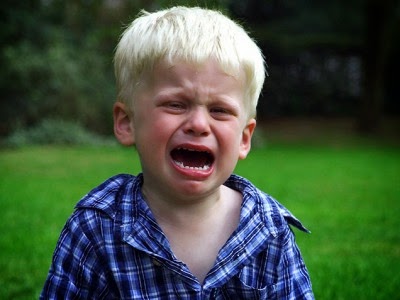 I recently got into an argument with a male friend about the topic of boys and crying. He was arguing the moniker "boys don't cry" needs to be abandoned, and his argument was based on the belief that women desperately want men that aren't afraid to show their sensitive side. Naturally, I disagreed.

First, the display of emotion conveys weakness. Throughout our history, men have served as protectors from outside threats. The stronger the perceived strength of any given tribe, the less likely rival tribes would raid, pillage provisions, rape the women, and enslave the children. If even one member of the tribe's protective class showed weakness, the likelihood of an attack would increase, and casualties would result.

This is less of an issue today given we don't have all that many rival gangs at the perimeter of our tribe's lands (unless you're a member of law enforcement or the military... cops and infantry are discouraged from sobbing in the presence of the enemy.) However, men are still judged and ranked based on their ability to protect and produce, and visible weakness does reduce a modern male's status relative to other men. Sorry beta males, but that's the price of androgyny.

Second, women are not aroused by weak men. Women make the same attribution other men make. Crying conveys weakness. In fact, I would say the "women love sensitive guys" lie is among the most damaging gender-based beliefs we've spread in my generation. But how could this be? After all, this lie is repeated everywhere.

If you recall our lesson on hypergamy, women want men that are alphas (who are decidedly NOT weak) and beta providers, ideally in the same package. The problem with a crybaby male is they are the antithesis of the alpha, and the alpha is what turns women on. If a man is willing to cry in front of a woman, that's a powerful indicator he has little or no alpha traits. He may be a great provider, but he's not going to arouse her beyond the honeymoon phase of the relationship. The relationship is pretty doomed to be just another notch in her serial monogamy headboard.

I have come across several women that insist they find men that cry in their presence "sexy", but every one of these women are in their mid-thirties, have never been married, and routinely lament about the "lack of good men out there." Some of them may have been this woman, if you catch my drift.

There ARE exceptions to this rule, but they're very far and few between. Think "death of a loved one", "your team just won the championship", or "the end of Old Yeller." 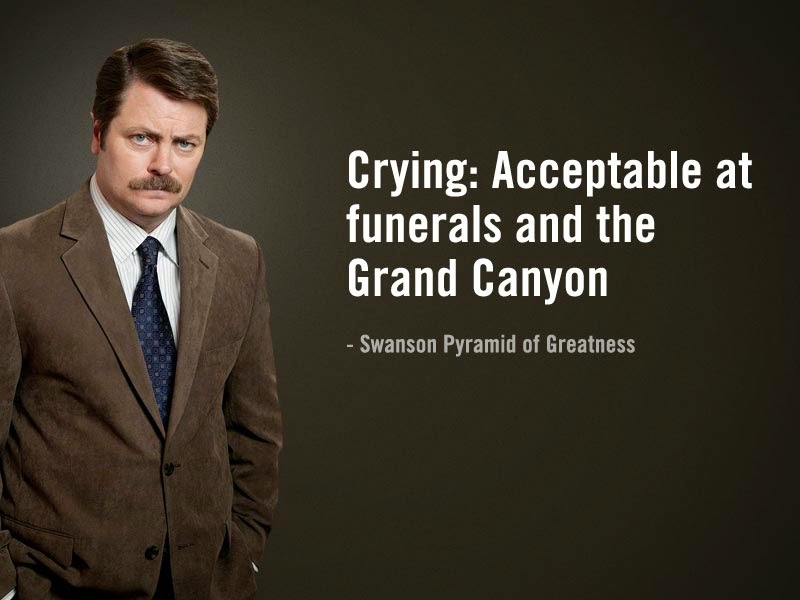 So We're Just Supposed to Bury Our Emotions?

In my last post, I wrote about how and why masculinity has been actively and passively extinguished in our modern society. One of the greatest travesties of this process has been the systematic destruction of the male-exclusive spaces. Men simply do not have opportunities to congregate with other male friends in an environment that's free from female influence. In many cases, this is a result of guys allowing their wives or girlfriends to tag along (she's just one of the guys.) In other cases, women have actually forced their way into male-only spaces via the judicial system under the guide of gender equality.

While that seems like a virtuous outcome, it robs men of the one place they were free to actually share their emotions - among their male tribe members.

Men have just as much range and potential for emotional expression as women, we're just taught to suppress those emotions when conditions warrant. Since expressing emotion in the presence of women reduces the male's attractiveness, we're more or less relegated to male-only environments. That's the same reason males can't just share their emotions with their wives and girlfriends... it makes them appear weak and unattractive.

The obvious solution - create a renaissance of male-only spaces so we have an emotional outlet. This is a major goal of my San Diego Man Camp project. While it's still in the planning stages and exists only as a Facebook group, the goal is to make an actual live group that will meet weekly here in Southern California.

This man-space issue is so very critical because, as most beta males would agree, many modern males are completely isolated from other males. I addressed part of this problem in No Bone Zone; both men and women today have the soul mate "you complete me" mentality. We believe our wives and girlfriends should be our best friends, so we let most of our male friendships fall by the wayside.

This has certainly been the case with me. The number of close friends I have has steadily dwindled over the years. I have quite a few casual male acquaintances, many of which I would consider friends. But good friends that I can share emotions with? That's a very, very small number. I want that to change.

Historically, we taught boys to avoid crying in the midst of the enemy to avoid appearing weak. We taught boys to avoid crying in front of girls because it made us less attractive. Boys were taught to control their emotions and remain stoic until an opportunity arose for them to release the emotions in the presence of other men of their tribe. That is the reason male-only spaces are critically important. That's the primary reason I'm motivated to create my own male-only space.